10 Reasons We Suggest Shopify Plus For Enterprise Users

The last few years have seen an incredible rise in merchants for the eCommerce market. Ever since a certain pandemic, more and more merchants are permanently shifting business to the online marketplace.

Today we speak about a specific niche of this eCommerce market. These are the enterprise-level merchants.

These enterprise-level merchants are generally a global presence, and typically with annual multi-million-dollar revenues.

Because customers are the currency of enterprise commerce, successful companies should develop platforms that work toward multiple customer transactions and engagement. Acquiring, managing, and cultivating a customer base is crucial to an enterprise commerce’s competitive strategy just like it takes money to make money.

Speaking of platforms, we Shopify Plus Experts and Shopify Plus Developers in Singapore bring you to the Shopify Plus level platform specifically built to cater to the enterprise-level eCommerce merchant’s needs.

Here we speak of all the advantages you get by being part of Shopify Plus:

When the whole world is waiting for Black Friday and Cyber Monday bargains, Shopify makes sure that all of your eCommerce needs are met by handling surges in traffic without causing you to crash. In fact, Shopify doesn’t just cater for high traffic times either – they completely remove any concern you might have regarding having sufficient uptime so that you can be ensured a deep sense of security and peace of mind!

In fact, Shopify Plus supports over 11,000 transactions every minute and maintains an impressive uptime of 99.99%. There’s no limit to the number of products or bandwidth your store will need to deal with the demand.

If you’re using Shopify Payments (Shopify’s own payment gateway powered by Stripe), there are no transaction fees.The US credit card fee as of 2022 is 2.4% + 30c for online transactions, and 2.4% + 0c for point-of-sale ones.

Using the Shopify Payments gateway helps save that money. Also, Shopify Payments provides a 4x faster checkout than standard experiences and a 91% conversion rate on mobile devices as per Shopify.

Presently there are over 100 Million global Shop Pay users.

Merchants know a 24/7 service must be available as soon as you launch your online store. These Shopify Plus merchants have access to Shopify Plus’ 24/7 merchant support called the merchant success program, in addition to the ongoing access to customer service representatives and the knowledge base, API documentation, and help with customizable Shopify themes.

In fact, the merchant starts off the building of their website after being introduced to a Launch team who helps you get your store online faster by assisting with migration tools and strategy, custom integrations, and solutions to meet their requirements.

Tired of repeating the same process in sales over and over again?

From simple operations to multi-step workflows that connect with your apps, Flow gives you the flexibility to automate repetitive tasks so you can focus on your business. Tailored solutions. Limitless potential.

From marking the last few items in stock as ‘Last Chance’ before they sell out, to Fraud Detection. Shopify Flow comes into use for all your daily activities.

Another feature that Shopify Plus customers can take advantage of is Scripts.

Shopify Scripts are small pieces of code that let you create personalized experiences for your customers in their cart and at checkout.

You can use scripts to create discounts that are applied to a cart based on the items in that cart as well as other cart properties. You can also use scripts to customize the shipping and payment options that are available to your customers.

Scripts give stores a way to write custom Ruby that is run on Shopify’s servers and affects each customer’s carts at a fundamental and unique level.

Are our sales events becoming a daunting task for you to complete at the last minute?

Launchpad is a scheduling tool that is found inside your Shopify admin allowing you to schedule product visibility, Shopify Scripts, themes, discounts, and more with a defined start and end time. You can now prepare your Shopify store for any event well in advance, without all the headaches.

Shopify Plus is ideal for retail brands who want to scale up and break into international markets. The platform removes the barriers to international commerce, so merchants can deliver the experience their customers expect, in any language or currency.

Shopify understands that enterprise-level commerce requires a robust infrastructure that’s capable of serving exponentially more customers, along with more complex operations, integrations, and support. That’s why Shopify Plus has been designed for high-growth businesses that are about to scale.

No need to bother about server requirements anymore as Shopify automatically does that for you. No extra charge.

The ability to customize with Shopify Plus really allows you to push to the limit, and be confident that all payment information is safe. It really makes customers feel like the site is going to take care of them.

On the other hand, Shopify Plus allows you to add unlimited staff accounts and enables additional permission settings. You still have complete control through the staff admin role.

The average cost of a malware attack is $2.6 million, and cybersecurity is a very big deal. It’s not just about the cost to your systems—a cyberwar attack can also mean losing the trust of your customers.

According to TrustedSite.com’s 2020 research, 92% of consumers have concerns about purchasing from unfamiliar websites—and more than half have abandoned shopping carts because they didn’t trust the site with their credit card info.

Shopify is certified Level 1 PCI DSS compliant. This compliance extends by default to all stores powered by Shopify. PCI Level 1 is given to businesses that process over 6 million card transactions per year across all channels.

As a brief read, I’m also including a small case study of Staples, who re-platformed in Half the time, for half the cost, on its way to record sales!

Staples was in a time of new beginnings. In 2017, as part of its acquisition by a private equity firm, the famed office supply chain was split into three arms. Among them was Staples Canada, which would be independently managed and operated by its American parent.

Flexibility: Staples once could only deploy major changes or new promotions once a day—at night, when the entire site had to come down to update. No more.

Site stability: Busy shopping seasons like Black Friday and Cyber Monday—and, especially for Staples, back to school—needed to be times when the company was no longer consumed by managing capacity or the threat of servers going down.

Upmarket infrastructure: Staples required access to an app ecosystem that could effectively manage a host of systems and features that an enterprise of its size requires, such as order management, search, reviews, email, store locators, and a custom checkout. Replatform time: Staples couldn’t wait forever. It wished to be up and running in less than 12 months.

Cost: Its new site had to support one of the nation’s largest retailers. But it shouldn’t also come with a price tag companies of its size was used to paying. Staples preferred to redirect many of the resources it had been spending on its eCommerce platform into ways it could improve customer experience.

With Shopify Plus, Staples found:

Less than 12 months after it began, by early summer 2019, Staples’ new site was live. The next greatest test was to prove the platform would be as flexible as promised. As the holidays approached, Lee (Senior Director, Staples Canada) found a new reality when it came to scheduling promotions and sales.

Where once Staples could only schedule new site promotions the night before during Black Friday Cyber Monday, it was now free to update or cycle through sales campaigns as many times per day, in real-time, as his team wished.

Lee found Staples could move faster still. One morning in Mar. 2020., as the first wave of COVID-19 repercussions hit the global retail economy, Apple announced all its stores worldwide would close. At 9:30 a.m., Lee discussed the news internally with his team. Within an hour, Staples’ main hero website campaign featured promotion on MacBooks.

Not long after, Staples leaned into the flexibility of Shopify Plus to change its banners, pages, purchase flows, and customer email communications to launch click and collect for shoppers to buy online and grab items by the curb outside the Staples closest to them. In less than 72 hours, Staples rolled out the program across all its Canadian stores.

Staples’ Black Friday Cyber Monday sales, according to the company, set an all-time record. Its other big sales events, such as back to school and Christmas, were all up from the previous year, too.

The company’s greatest demand came as COVID-19 forced a new reality onto shoppers. Over 30 days spanning Mar.-Apr. 2020, Staples’ traffic, transactions, and site revenue increased in excess of 100% over the month that came before.

“We’ve experienced Black Friday-like levels on the website every day for the past 30 days,” Lee says. “We’ve never had a consecutive run for that extended period of time ever. We’re extremely proud that our platform has been able to scale to unprecedented demand seamlessly. Uptime on the site has been at virtually 100% with no degradation of performance at a time when our customers need it most.”

In Short, Staples’s move to Shopify Plus brought them:

The above-mentioned pointers just scratch the surface of a Shopify Plus plan. Among the many other features are Ease of Use and a massive App ecosystem along with a ‘Headless setup’ allowing you third-party applications to be built into the front end while the back end works separately and yet seamlessly. Shopify even has its own Point of Sale service that allows you to make sales on location and manage all your online and physical operations under a unified platform.

Get in touch with a Shopify Plus expert or Shopify Plus Developer in Singapore to know more about how the Shopify Plus platform works or find us at hi@mswebinternational.com. Being a Shopify Plus merchant has its own prerequisites, so speak with us before you move for an upgrade.

Hire Shopify Plus Experts to leverage the true potential that you deserve – more customers and more sales! 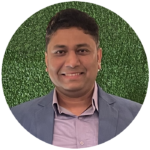 Sudipta Mondal is a technology entrepreneur and a software developer, eCommerce Consultant for International Brand & Shopify Experts and Partner. Having founded his own company ‘MS Web Designer’. Sudipta has been working in the field of startups for more than 15 years now and has established multiple SAAS products with his wife Masum and has helped develop multiple E-commerce brands on Shopify. Together they have served over 1500+ international brands including fortune 500 companies to setup and level up their online business.

Getting Traffic But no Sales

10 Proven Steps that will Improve your Shopify Website Speed

10 Advantages of Being on the Shopify Platform!

10 Reasons We Suggest Shopify Plus For Enterprise Users